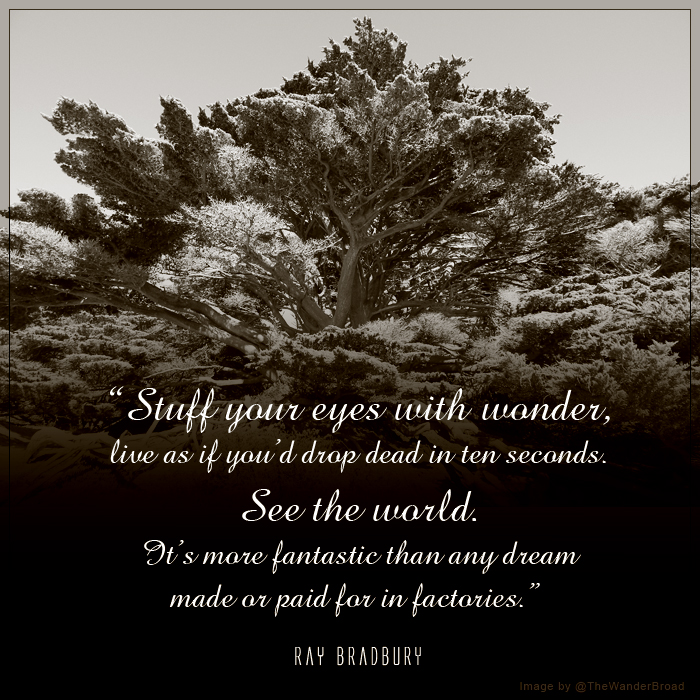 “I have found out that there ain’t no surer way to find out whether you like people or hate them than to travel with them.” – Mark Twain

“Let us step step into the night and pursue that flighty temptress, adventure.” – J.K. Rowling

“You know, sometimes food is like time travel. You inhale an aroma, take a bite of something and suddenly, bam! you’re back at the moment you first tasted it!” – Star Trek: Voyager

“Travel makes one modest. You see what a tiny place you occupy in the world.” – Gustave Flaubert

“Because you look around and every street, every boulevard, is its own special art form and when you think that in the cold, violent, meaningless universe that Paris exists, these lights, I mean come on, there’s nothing happening on Jupiter or Neptune, but from way out in space you can see these lights, the cafés, people drinking and singing. For all we know, Paris is the hottest spot in the universe.” – Owen Wilson in “Midnight in Paris”

“Twenty years from now you will be more disappointed by the things that you didn’t do than by the ones you did do. So throw off the bowlines. Sail away from the safe harbor. Catch the trade winds in your sails. Explore. Dream. Discover.” – Mark Twain

“A journey of a thousand miles must begin with a single step.” – Lao Tzu

“Broad, wholesome, charitable views of men and things cannot be acquired by vegetating in one little corner of the earth all of one’s lifetime.” – Mark Twain

“Man cannot discover new oceans unless he has the courage to lose sight of the shore.” – Andre Gide

“The world is a book, and those who do not travel read only a page.” – Saint Augustine

“To my mind, the greatest reward and luxury of travel is to be able to experience everyday things as if for the first time, to be in a position in which almost nothing is so familiar it is taken for granted.” – Bill Bryson

“A journey is best measured in friends, not miles.” – Tim Cahill

“Adventure is worthwhile in itself.” – Amelia Earhart

“I’m bored’ is a useless thing to say. You live in a great, big, vast world that you’ve seen none percent of. Even the inside of your own mind is endless, it goes on forever, inwardly. The fact that you’re alive is amazing. So you don’t get to be bored.” – Louis C.K.

“Do not go where the path may lead. Go instead where there is no path and leave a trail.” – Ralph Waldo Emerson

“He who does not travel does not know the value of men.” – Moorish proverb

“Travel is more than the seeing of sights; it is a change that goes on, deep and permanent, in the ideas of living.” – Miriam Beard

“Perhaps travel cannot prevent bigotry, but by demonstrating that all peoples cry, laugh, eat, worry, and die, it can introduce the idea that if we try and understand each other, we may even become friends.” – Maya Angelou

“When I was a little girl I had an imaginary friend and when I grew up he came back. He’s called The Doctor. He comes from somewhere else. He’s got a box called the TARDIS that’s bigger on the inside and can travel anywhere in time and space. I ran away with him and we’ve been running ever since.” – Doctor Who

“My life is shaped by the urgent need to wander and observe, and my camera is my passport.” – Steve McCurry

“We live in a wonderful world that is full of beauty, charm and adventure. There is no end to the adventures we can have if only we seek them with our eyes open.” – Jawaharial Nehru

“Do not stop thinking of life as an adventure. You have no security unless you can live bravely, excitingly, imaginatively; unless you can choose a challenge instead of competence.” – Eleanor Roosevelt

“I haven’t been everywhere, but it’s on my list.” – Susan Sontag

“And in the end, it’s not the years in your life that count. It’s the life in your years.” – Edward J. Stieglitz

“It’s a dangerous business, Frodo, going out your door. You step onto the road, and if you don’t keep your feet, there’s no knowing where you might be swept off to.” – J.R.R. Tolkien, Lord of the Rings

“Wandering around our America has changed me more than I thought. I am not me any more. At least, I’m not the same me I was.” – Ernesto Guevara de la Serna in “Motorcycle Diaries”

“Travel is fatal to prejudice, bigotry, and narrow-mindedness.” – Mark Twain

“The use of traveling is to regulate imagination with reality, and instead of thinking of how things may be, see them as they are.” – Samuel Johnson

“A tourist is someone who travels across the ocean only to be photographed sitting next to their boat. I have no intention of being a tourist.” – Predestination

“Stuff your eyes with wonder, live as if you’d drop dead in ten seconds. See the world. It’s more fantastic than any dream made or paid for in factories.” – Ray Bradbury

“What would you do if you knew you only had one day, or one week, or one month to live. What life boat would you grab on to? What secret would you tell? What band would you see? What person would you declare your love to? What wish would you fulfil? What exotic locale would you fly to for coffee? What book would you write?” – from the movie “One Week”

“You don’t have to be rich to travel well.” – Eugene Fodor

“If you reject the food, ignore the customs, fear the religion and avoid the people, you might better stay at home.” – James Michener

“If you focus on what you left behind you will never see what lies ahead!” – Ratatouille

“A mind that is stretched by a new experience can never go back to its old dimensions.” – Oliver Wendell Holmes 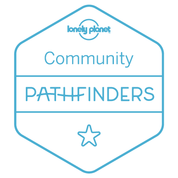